Judaism was featured in the "Talking Faith?" Forum organised by City of Greater Dandenong Interfaith Network and Dandenong Library in their annual panel discussion to shine the light on major religions in order to promote dialogue, respect and understanding. Five panellists representing different streams and viewpoints were invited to answer questions that citizens of Dandenong, Victoria's most culturally and religiously diverse municipality wanted to know about Jews and their faith, beliefs and practises.

Prior to the forum some 50 people took the time to place in public question boxes their thoughtful and searing questions to the panellists with about 50 people attending the forum on Tuesday 17 May at Dandenong Library. Discussion was lively and warm, with great chemistry and respect between the panellists which the audience enjoyed, almost all of them staying on for the kosher supper that was provided. 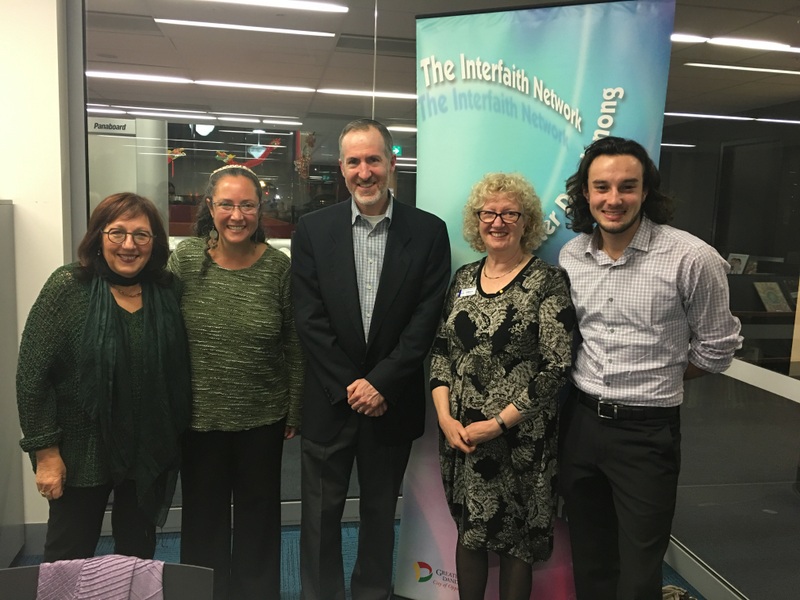 The panellists expressed divergent views in respectful and complimentary manner, explaining the history and timeline then moving on to areas of practice and ritual. In answer to questions about Jewish dietary laws, Rabbi Shamir explained that kashrut is believed by some to relate to ethics and respect and consciousness of an animal. Rabbi Alison added that kashrut also forced us together as a community. Joel Kuperholz further explained that the Torah expressly forbids cooking a calf in its mother's milk so we separate milk and meat and thus separate life and death; making us conscious that we are eating something that comes from an animal to provide life or an animal itself which has resulted in its death.

In answer to questions about conversion, lineage and recognition of Jewish status, Rabbi Shamir explained the orthodox viewpoint where lineage is traced exclusively through the mothers. Rabbi Alison from the progressive movement, explained that her movement recognised anyone with either Jewish parent as long as they practised Judaism exclusively. On conversion there were respectful differences between orthodox and progressive theologies, with Rabbi Shamir highlighting the 7 basic laws that govern humanity and the point that a non-Jew did not need the legal responsibility to embrace the 613 Jewish Commandments. Again, Rabbi Alison highlighted differences when she pointed out that progressives see those laws as a part of heritage and tradition but that people were empowered to think for themselves which laws are appropriate for themselves and not be limited by confines of legal texts. Dr Helen Light added that the laws were man made later and reflected different times.

Another question about the differences in Jewish identity resulted in fascinating and enlightening discussion. Rabbi Shamir explained that Orthodox Jews were bound by legal statutes. Rabbi Alison saw the Jews as being a people rather than a religion. She spoke of her own family members who were secular Jews living a full Jewish life without a religious basis. They identified as Jews by blood and identity not by faith. Joel Kuperholz agreed that many prominent Jews, from Albert Einstein to Chaim Weizman were atheists so their identity was tied to Zionism, the Land of Israel and their ancestry and culture. In fact at some youth groups today, God has been removed from the prayers and texts but they still celebrate the festivals and traditions.

The last question of the night was about Jesus and how Jews viewed him and what effect Jesus had on Judaism. Panellists all agreed he was a historical figure, he lived and died a Jew, but he is not mentioned in Jewish texts and had no effect on Jewish faith, beliefs or practice.

On that note, panellists and audience members continued lively and open conversations over kosher supper, generously provided by the City of Greater Dandenong and the Interfaith Network. Helen Heath, Interfaith Development Officer, from the Interfaith Network and Library Staff Bojana Grahovac, My Van Dang and Roger Coleman worked in partnership to organise the successful night. In remarks made over supper they all agreed it had been a very successful and engaging evening discussion. In reflecting on previous Talking Faith? Forums they also commented that every year the panellists from different religions and spiritual traditions have differences and represent diverse viewpoints from within the major religion they practise, but the Jewish panellists were especially eloquent and educational. Helen Heath had invited each panellist having worked with each of them in her various roles in interfaith dialogue.